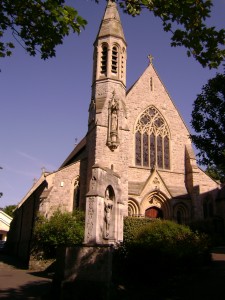 The Church of Our Lady Help of Christians was built in 1891 and was consecrated in 1906.
It is a good example of Victorian Gothic style and is a Grade Two listed building.
It was extensively renovated in 1999 with the help of a major grant from English Heritage. 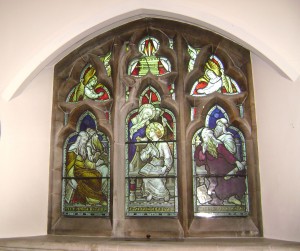 The founder of the parish was Father William Gowan Todd. He belonged to an Irish Protestant family and worked as a Priest in Dublin before he was received into the Catholic Church. He went to Rome and obtained a Doctorate in Theology before returning to Southwark. His first appointment was to Chislehurst, where he founded an orphanage for boys. He moved to Greenwich in 1860 and rented a house on Crooms Hill which belonged to the local parish. In 1870, he required a larger house for the orphanage and purchased the present presbytery from his own resources. The property was for sale by auction with a reserve price of £2,750 but it failed to reach the reserve and he purchased it for £2,500.

At first, the mission at Blackheath was the orphanage with a chapel on the site of the present hall for the use of the residents. In 1873, it was granted the status of a parish so that it could be used by the local people as their parish Church.

There was a need for a permanent Church and the Butler family, who lived in Lee Terrace, made several attempts to purchase a site. They met with constant problems as most of the land in Blackheath was leasehold. They concluded that the only solution was to build a Church on the land adjoining the orphanage. The site was originally leasehold, but at a later date, the freehold was acquired. The present Church was completed in 1893, at a cost of £4147, met by the members of the Butler family.

The orphanage, by then known as St. Agnes House, was extended several times and continued to serve as a hostel for Boys in the care of the Diocesan Children’s Society at the beginning of their working lives. This work lasted until 1968. It is currently used as an office block.

The Church is dedicated to Our Lady Help of Christians but is known to many people as St. Mary’s.